I came across Ted Weidman’s comment on
Soundproofing Apartment Wall regarding the flammability and toxicity of MLV. I have not been able to find information on this anywhere else (perhaps I don’t know where to look), I am wondering if materials used to insulate/soundproof pipes are made of similar materials? We are looking to soundproof a wall in between our very noisy shower pipes and my daughter’s bedroom, so the idea of using materials that would produce toxic fumes in a fire is a bit disconcerting to me. Thanks!

Thank you for the E-mail. I would be happy to discuss a few different approaches if you would like, so if you have time to call during the day, please feel free!!!

As far as blocking sound goes, if I could get a bit more information about the specifics of this one, it might help. Or, if you have the ability to take and E-mail a few digital pictures of the area, that might be a HUGE help! 😀 A picture is worth 1,000 words, right? 😀

As far as blocking the sound, are you treating the pipes inside of the wall, or do you have the ability to re-do the sheetrock in your daughter’s room? I will assume, for now, that you have opened up the wall and can only treat the area inside of the stud cavity. First of all, I know it sounds terrible, but don’t worry about the fumes in case of a fire. By the time the fire gets inside of the wall, so much other stuff has already burned and produced smoke it is a mute point. By this time everyone better already be out of the house and the fire trucks better be spraying. So, as long as the vinyl is IN the wall, it is a safe product to use. If, however, the vinyl was used as wallpaper, and the fire would be able to get to it FIRST, that’s another story.

Ok, with that out of the way, I can start explaining a bit about the products that you can use to treat the problem. The EXACT product and approach that I would suggest might change depending on the plumbing you are dealing with. You mentioned that you are trying to quiet down some “very noisy shower pipes” so for some reason, I assume you are dealing with old-school cast iron pipes. If this is the case, you can quiet them down a LOT by securing them to the wall properly. A lot of noise is created when the pipes move, physically – and hit the wood around them. Even just the vibration of the pipes makes noise and eliminating that can yield some surprising results. You might want to get a plumber or someone with plumbing experience involved with that, so you are sure to secure them properly as certain other metals will interact with the iron and corrode it quickly.

As far as acoustical treatment goes, I’ve got a few different products that might help and choosing exactly which one/ones for you might take a bit of discussion. Stopping sound and eliminating vibration are the same thing. So first, I would try to make sure the pipes are decoupled (not touching) the structure around them. This can be done with a high temp silicon type product or with rubber isolators. This way, when the pipes vibrate, the energy from the vibration doesn’t get into the wall. The second thing to do is to increase the mass/density that exists between the noise source and the potential listener. This is where the vinyl comes in. The vinyl is a technology that is designed to replace lead, very dense, heavy stuff. That mass and that density, coupled with the elasticity (rubbery like) vinyl turns the noise energy into heat energy as the vinyl resonates and moves. Think of a 5′ tall, super heavy punching bag. The weight of the bag absorbs the punch. If the bag were filled with packing peanuts, the bag would swing all over the place when you punch it.

Rather than wrapping the pipes directly with the vinyl, you are going to need some decoupler to make sure the vinyl doesn’t touch the pipes. That is done with one of the two following products:

Both of these products will do the same thing, but each has its own advantage and disadvantage. If you are concerned with heat and/or smoke developed, I would go with the B10LAG as the fiberglass decoupler has a much higher heat tolerance than the other. I say both because the “Barrier Decoupler” and the “Pipe Lagging with decoupler” is the exact same product. Talk to the owner of my company about that one. They are both intended to be used by wrapping them directly around the pipe and securing them with fasteners like zip-ties and/or tape. Personally, I would use both because once that wall is closed you don’t want that stuff falling down. There is nothing wrong with overkill for installation as long as you don’t zip-tie the stuff so tight that the decoupler compresses and the vinyl touches the pipe.

Why the decoupler? The decoupler acts like a shock absorber and allows the vinyl to move and flex VERY slightly as the sound energy hits it. Think about the decoupler like a pillow and a cell phone on vibrate mode as the sound. If the phone is sitting on your kitchen table and it rings, the vibration easily transfers into the table. If the phone is sitting on a pillow, the vibration energy can’t get to the table because the pillow absorbs it. Same theory in the wall.Both of the products come in rolls that are 54′ wide. The lengths, as well as the costs, vary.

Another product that will help is our Ultra Touch natural cotton fiber insulation. I used this product when I was remodeling a bathroom at a house that I’ve owned. This bathroom was on the other side of the wall from both bedrooms, and the wall that the shower/tub was on was against the same wall as the master bedroom. Being in the acoustics/soundproofing industry, of course, I was going to do what I could to eliminate the sound transmission – so I bought a couple of bundles of the Ultra Touch and stuffed it into the stud cavity. It helped tremendously. It is made from recycled cotton rather than fiberglass and has quite a bit more mass and density than fiberglass. 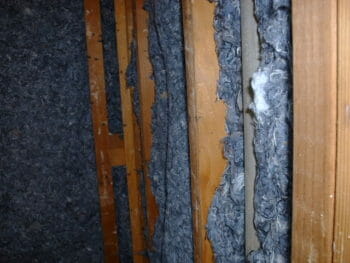 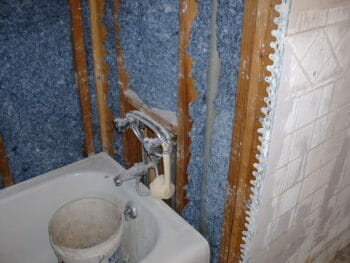