I take about three-to-four calls a month from people who are looking to soundproof or acoustically treat a kennel, boarding room, or animal hospital. I have provided a few different products to approach and fix the noise problem in a few different ways. Typically kennels or boarding facilities are set up very similarly which revolves almost specifically around function and clean-ability. When you walk into a kennel, you’re going to see a concrete floor, painted cinder block walls and either a metal roof deck or a sheet rock ceiling. Kennels and boarding facilities are dirty areas that have to be sprayed down and cleaned constantly. When you cram 20 dogs into a concrete room, it doesn’t take a degree in physics to guess that the volume of that room is going to be extremely high. Even if it is one small dog barking, it won’t take long for one to develop a headache. I have been working with my local animal hospital to treat the boarding facility in the back of their building. This is an attached room rather than a separate building and entry to the room is gained through a heavy steel door. When I first looked at the door, there was a self-leveling door bottom screwed into the bottom of the door, but it was not adjusted properly and didn’t make a good seal. This facility has 9-10 kennels which have concrete block separating walls, two concrete exterior walls, two sheet rock interior walls, and a standard drop ceiling. Another area that the hospital wanted me to look at was the exam rooms which had almost no privacy at all, and when I saw the space, it was very clear as to why. The floor in the building is a ceramic tile (obviously for clean-ability) and the doors of the exam rooms had about a 3/4″ gap along the bottom of the door. The sound would travel through that gap as if the door was not there. I worked with the management at the hospital and put together a plan of attack. My plan was to introduce 112 square feet of an acoustically absorbent wall panel into the kennel area, to acoustically treat the back of the metal door, and to continue the gasketing around the door jamb. I also wanted to install weather stripping around the door jambs of the exam room doors and install automatic door bottoms to eliminate the air gap between the door and the floor.

The intent of introducing an absorbent panel on the inside of the kennel area was to decrease the reverberation time of the room. Often times, with multiple noise sources in a room with almost all hard surfaces, the overall sound pressure level of the room can actually be MORE than the sum of all of the noise sources themselves. These sound waves keep building up and bouncing off of each other gaining strength and intensity. People often call this the cocktail party effect. With only one or two people in a room, it is very easy to hold a conversation with another person or people. When that room is filled with, let’s say, 20 people, after about 10 minutes, everyone finds themselves screaming at the people sitting next to them just to be heard. They have to raise the volume of their voice to compete with the ambient noise of the room.

Dogs do pretty much the same thing. If you get one dog barking, it is natural for the other dogs to bark as well. With this noise bouncing around and not having anywhere to be absorbed, the dogs just keep going and going and going – driving nearby employees crazy.

First, the exam rooms. Each of the exam rooms has two doors – one that allows access from the lobby, the other leads to the “care area” or back of the building where the dogs are given shots and the like. At the bottom of each of the doors, I installed the 330-C-36 Automatic door bottom. The door seals were extremely easy to cut with a Chop Saw/compound Miter saw, and each installed onto the door with three Phillips head screws which come with the door bottom. 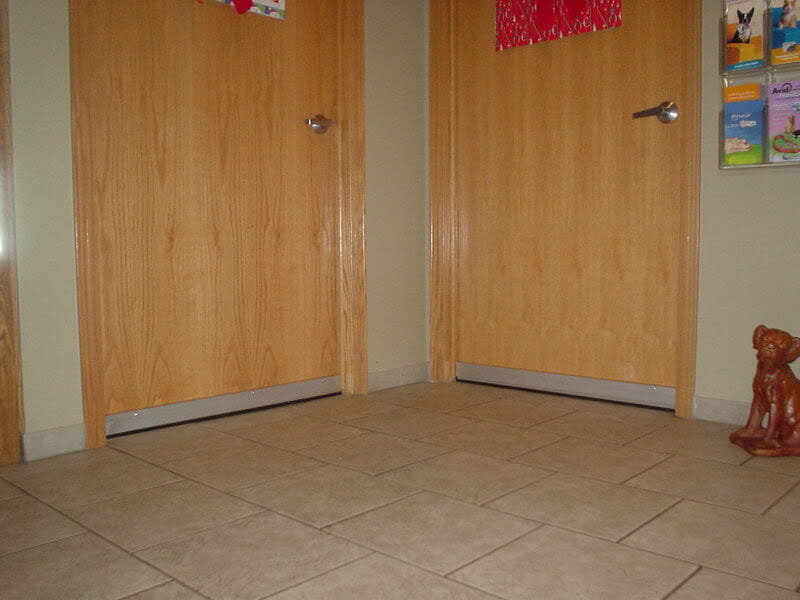 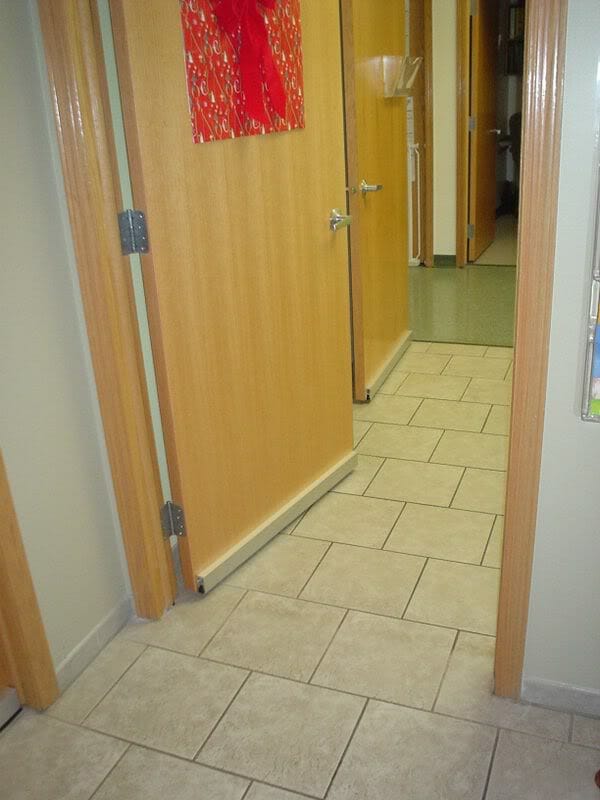 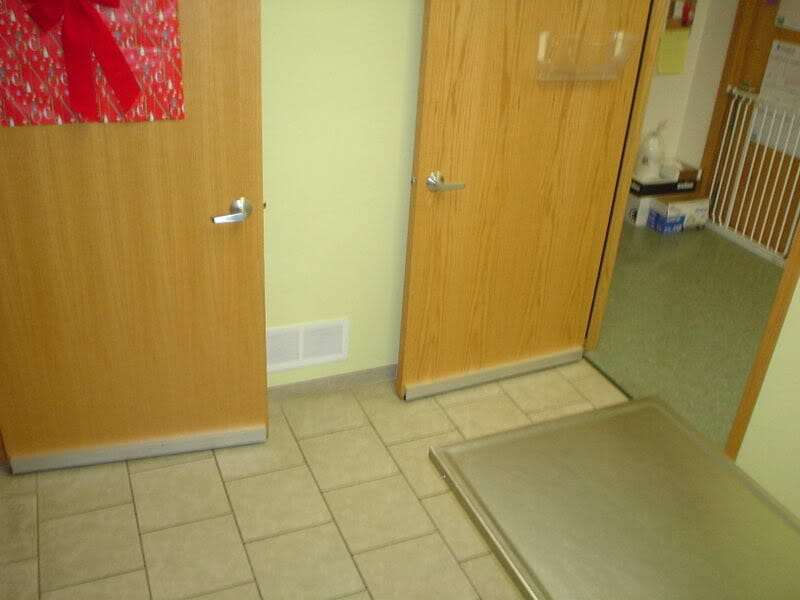 Next, onto the kennel area. I installed a 33-C adjustable jamb seal on the door jamb introducing a seal around the perimeter of the door. I then cut three panels of 2″ thick Sound Silencer and used a construction grade adhesive and glued them to the noise-source side of the door. 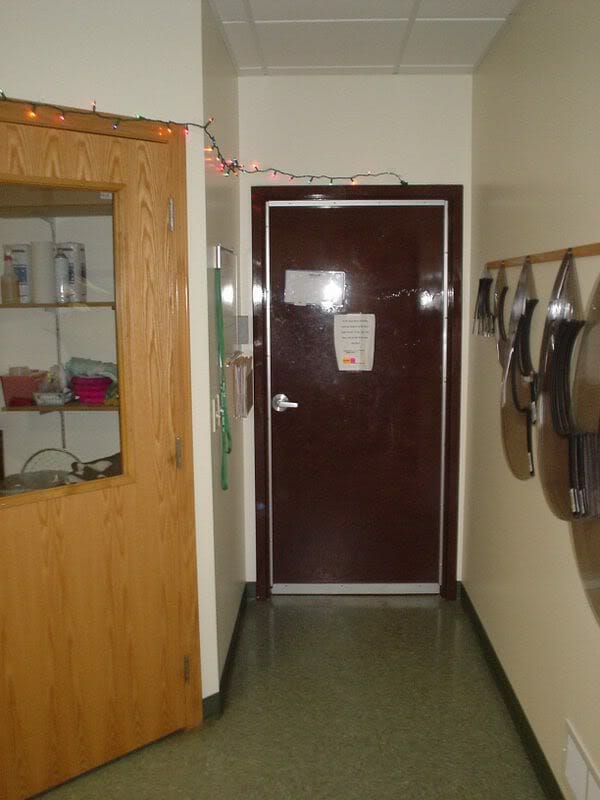 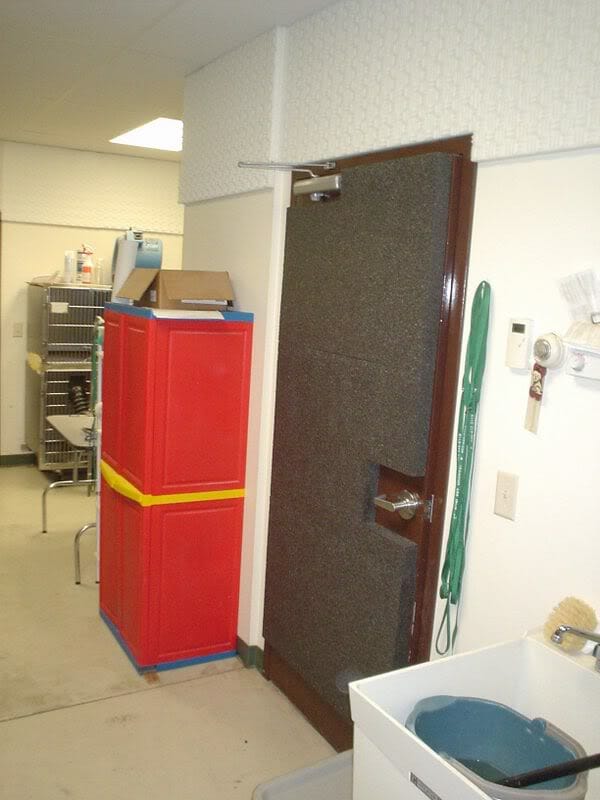 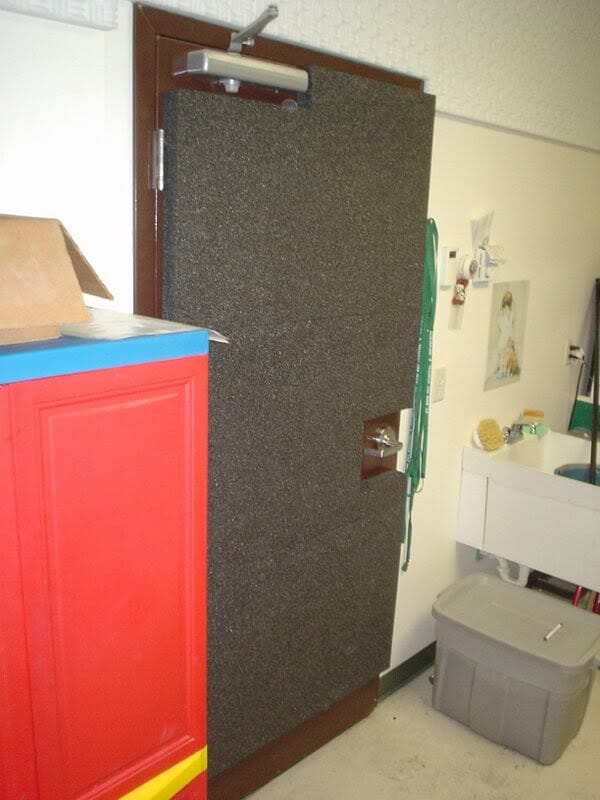 Finally, considering that the kennel area was constructed of all hard surfaces for clean-ability, I wanted to introduce an acoustically absorbent panel into the space to reduce the reverberation time of that room. Decreasing the overall sound pressure level greatly helps when one is trying to reduce the amount of sound leaving the space. 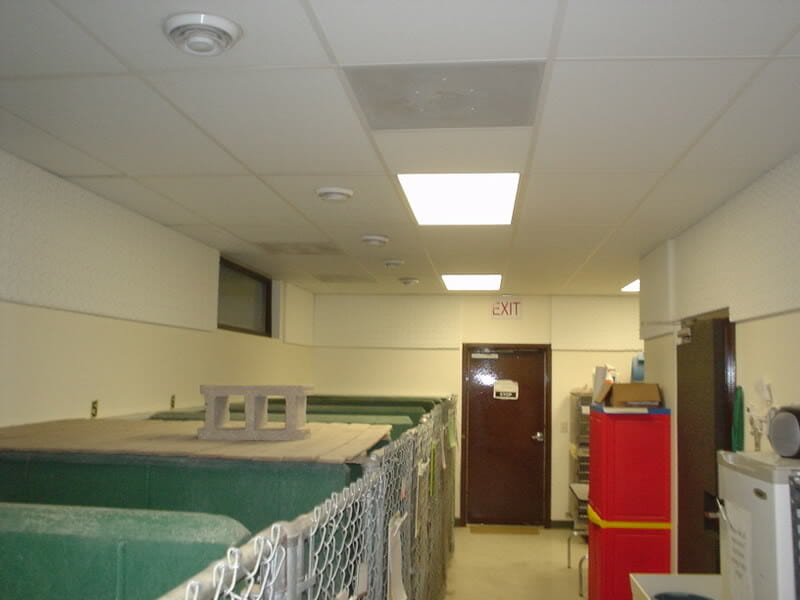 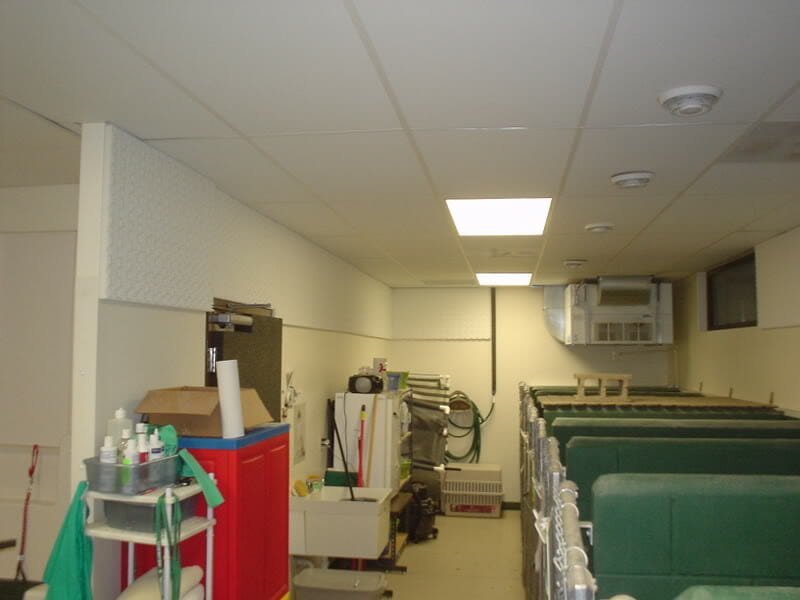 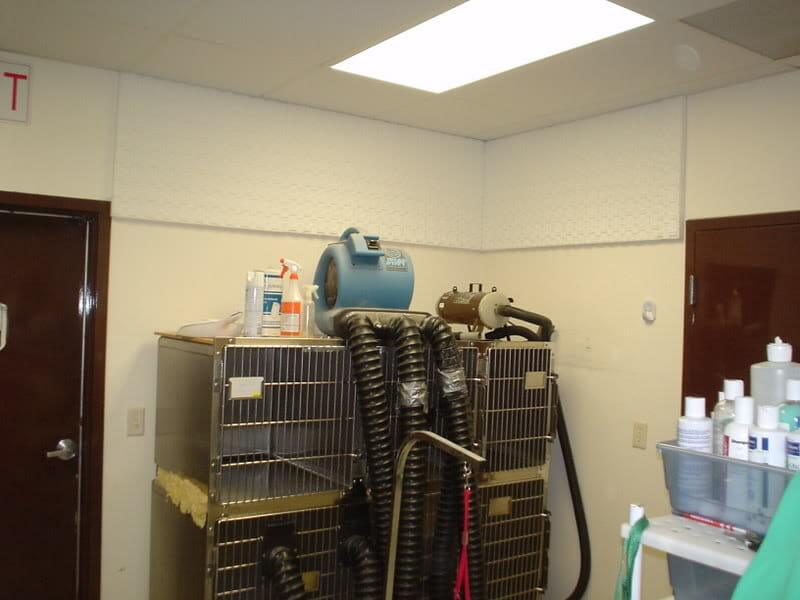 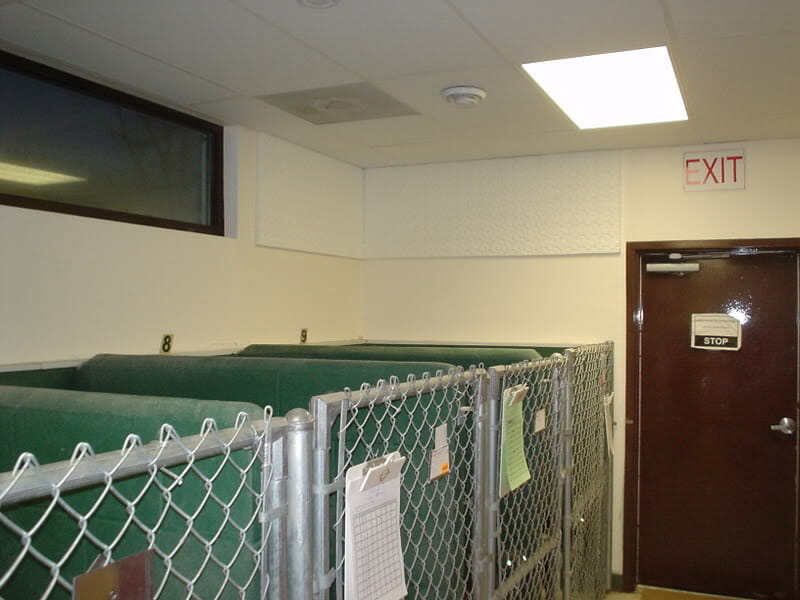 Now that everything is installed, the exam rooms are much more confidential, and the sound leaving the kennel area has been significantly reduced. Completely eliminating the sound transmission is extremely difficult to do, and will generally require altering the construction of the space and thousands of dollars. Most people that work with animals expect to hear the animals to some degree- and a sound proof room is not needed.