In October of 2010 we moved our hair salon to a new location. The floor is hardwood, the walls are plaster over block, and the ceiling is drywall. While renovating, the echo was very noticeable but I was hoping that once the fixtures were brought in there would be some sound absorption. There, of course, was none and opening day was bedlam. The place was so loud, customers and stylists could hardly hear each other as everyone was raising their voice to speak over each other at the same time. Add hair dryers to the mix, well you can imagine. I immediately began a search for a solution that would work, not challenge the aesthetics, and be cost effective. I read every testimonial on the Acoustical Surfaces website, over and over. I spoke to Ted Weidman who patiently answered my questions and finally ordered a variety of colors of the 2 x 4 Echo Eliminator cotton panels.

After receiving the various colors, I decided to order the product in white. I cut the 2 x 4 panels into 2 x 2’s and spray-glued them to the 10 foot high white ceiling. By string-lining the ceiling first I felt I could install them in an orderly way and work around the myriad of lights, speakers, ac vents, and exhaust ports that were all over the ceiling. Ted had suggested that I order 3% of the total volume to be totally effective. I ordered a little less since I wanted to focus over the area where the stylists were and where most of the noise was being generated. If the panels worked I would order the rest. The panels work. They work incredibly well. The echo disappeared. The noise is contained. Stylists and customers can now have normal conversations. As a professional home renovator (who happens to own a hair salon) I was understandably doubtful this would really work. In short, I was blown away by its effectiveness. I noticed a difference in the acoustics after just 60 sq. feet (out of a total of 200) was installed. The cost was very reasonable. I thought the solution would cost much more. Aesthetically the panels actually add interest and texture to what was a very disorderly ceiling. Frankly I don’t think most people even notice anything. I went with white panels on a white ceiling because I did not want to bring attention to the panels by putting up color that would challenge design already in place.

I still have some echo in the rear of the shop where the reception area is. (parking is behind the shop so people enter from the rear). The rear is much better than it was but by adding another 40 sq. feet I will eliminate whatever echo is left in that specific area. This will actually bring me very close to the 3% figure Ted W. discussed. I would be happy to answer any questions about my experience with this product to any potential customers. 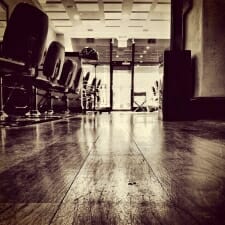