Vibrations can take several paths to compromise acoustic isolation. Green Glue noiseproofing sealant is a damping material, it’s purpose is to raise the damping of structures in which it is included. The literal definition of damping is the dissipation of energy over time or distance. In our previous article “Green Glue Compared”, we showed how the Green stuff stacks up to other damping options available to you. Those graphs illustrated the decay of energy over time. Here we try to assess just how quickly Green Glue noiseproofing sealant can destroy energy over distance.

The transmission of sound through structural paths rather than through the air is often called “flanking sound” – sound going to the next room through the floor or ceiling, rather than the walls. Sound going upstairs through the framework, etc. If we can reduce the amount of transmitted vibration, we can greatly mitigate the problem of structure-borne noise. 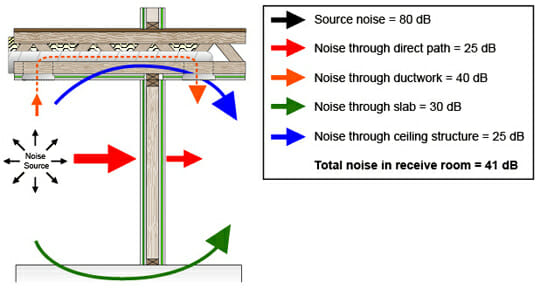 This diagram illustrates some simple flanking noise paths. The green arrow is direct sound – what you would measure in a lab to arrive at an STC rating, etc. – the red and blue paths are some simple “flanking paths”. Often, these paths are more important than the direct, green, path at many frequencies.

So Just How Much Decay Over Distance Can I Expect Green Glue Noiseproofing Sealant To Supply?

Testing the decay of vibration over distance in a mechanical structure is very challenging. All test structures have to be finite, and sound reflecting from the ends causes interference, modal activity, etc. and confuses the readings a bit. Since lab test samples essentially always have to be smaller than real-world constructions, this will lead to conservative estimates of decay over distance in the smaller structures (as some of the vibrations at any point is reflected). Nonetheless, this simple test illustrates, conservatively, the performance of the Green Glue noiseproofing sealant in this regard.

It can be helpful to view the simple vibration levels at all frequencies, to gain an idea of whether or not energy is decaying across the test distance at all.

These plots reflect acceleration levels with 20-20kHZ stimulation at the first test point (just across the support) and another point 42″ away. In just 42″, the vibration has decayed nearly to the noise floor, which is reflected by the horizontal red line. This reflects roughly 12dB of decay (we’ll take a more detailed look in a moment). 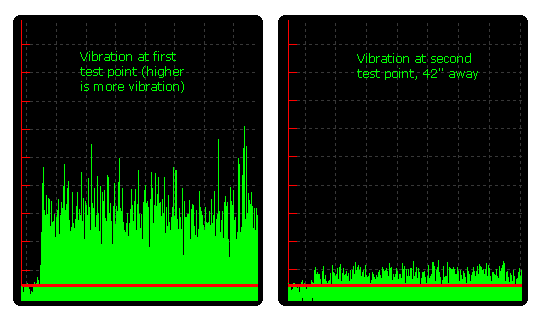 This audio file demonstrates the dramatic noise decay over 8 feet in a Green Glue noiseproofing sealant damped 5/8″ drywall panel. The majority of noise in the second segment is simple background noise.

Raw drywall doesn’t fare nearly as well. These are the acceleration levels 12″ across the first support, 36″ farther away, and 72″ farther away.

It may appear that the vibration level actually rises, but this is simply an illusion caused by a modal response in the drywall. The rate of decay is so low that sound reflected off the end of the test specimen can create peaks and nulls at various locations, giving the appearance of negative decay.

This test is meant to measure decay, so the absolute values aren’t what’s important, the change from position to position is. 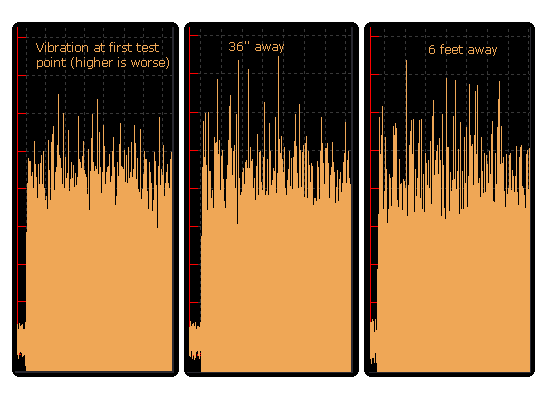 You hear the decay (lack thereof) over 8 feet in undamped drywall. The level hardly changes, the spectrum merely shifts.

This graph below reflects the frequency by frequency reduction in vibration level for Green Glue noiseproofing sealant damped drywall over a distance of 52″. The thick green line is an approximate reflection of the calculated prediction for damping of 0.30. The chaotic behavior reflected in this graph stems from the nature of the test. Suffice it to say that some things can be concluded 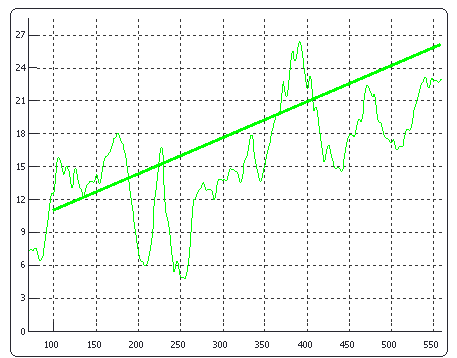 The Graph Above Gives Data For Decay Over A 6 Foot Section In The Center Of A 16 Foot Specimen, Again The Material is 5/8″ Drywall Damped With Green Glue