Exterior noise is a tough problem to combat not only due to atmospheric challenges, but also due to open air spaces around noisy machines. The following write up and pictures show how one particular problem was helped.

All of our acoustical quilted curtain panels are designed and fabricated on a per job basis. Ideally, an acoustical enclosure will be as air tight as possible. We try to design our acoustical walls and enclosures with this in mind – but our enclosures and walls can be only as good as the measurements that are provided to us. On this particular project, our plan was to span the gaps in the chain link with the acoustical panels. We decided to install three strips of Velcro where the gate panels would need to release from each other simply for ease of access.

The exterior grade curtain (BBC-T14, or BBC-T14-2”) is a composite panel – which means it is composed of two separate products and combined into one. Acoustically speaking, the composite panels do two jobs at the same time. These panels not only block sound from passing through them, they also absorb reflected noise within the walls of the enclosure.

The sound attenuation (or sound blocking) is done with the grey, reinforced Mass Loaded Vinyl that is behind and around the perimeter of the quilting shown (above or to the right). Because this vinyl weighs one-pound per square foot, it’s mass and density limits the amount of sound that is able to pass through it. On the noise-source side of the vinyl, you can see the grey quilted fiberglass which absorbs the sound within the enclosure. The fiberglass starts off as a 1.5# per cubic foot density fiberglass that is one or two inch thick sheet and is covered and quilted with a grey PVC facing which compresses it’s thickness. For the exterior grade curtains, we use silicon impregnated PVC as well as exterior grade thread and Velcro which are U.V. resistant.

When the curtains are fabricated, we install grommets across the top, middle and bottom of each panel. This is done not only to support the weight of the heavy dense vinyl, but also to keep the panels from moving when blown by the wind. The most common cause of damage to the panels is when the panels are not installed correctly and are able to move with the wind. If the panels are allowed to “whip” in the wind against their substrate, the grommets will pull out and the vinyl will break down due to friction.

All of the panels that we sell require an existing or site built substrate onto which they are attached with exterior grade zip-ties, wire or hardware. We commonly attach panels to existing chain-link fences around noisy air handlers or compressors. Before we fabricate any of the panels, we generate CAD drawings showing the panel measurements as well as the overall enclosure dimensions that must be approved by the end user before the order can go off to production. This is a “measure twice – cut once” procedure. It is a lot easier, faster and cheaper to fix a panel on paper than it is to re-manufacturer it and ship it to a customer. 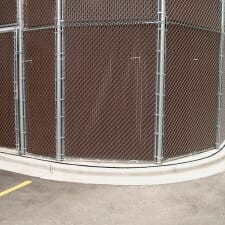 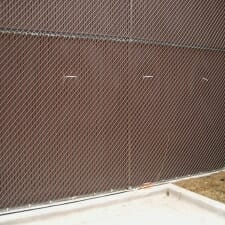 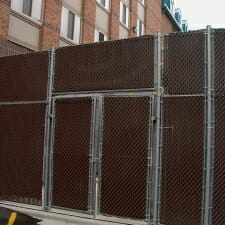