Back in 2012, the Parent Teacher Organization (PTO) of the “Growing Up Green Charter School” in New York City decided to try to tackle a noise problem that was bothering students, staff, and all visiting our school—and that was the painful noise in our cafeteria. Our school rents space that used to be a Catholic school—one side built in the 1920s, and the other in the early 1950s. As unique as any building can be, we suffered what we learned was an all too common problem—a nice, sturdily built room, with hard tile, steel beams, and concrete bricks, means also that a room will be NOISY. There was not a single soft surface in there to break up sound bouncing every-which-way, unless you count people, which you can, but each person had a mouth which was usually making some sort of racket. I suddenly realized why we were never allowed to talk above a whisper during lunchtime.
How loud was it? Multiple readings with sound meter apps, and professional level sound level meters, registered the noise hovering between 85 and 95 dB at the end of the day at pick up. I once had a noise meter peak at 105 dB (!) This is a dangerous level, which could cause permanent hearing damage.
Some students were not eating their lunch because the noise bothered them so much. PTO meetings in the space were difficult, because it was near impossible to understand what anyone was saying. Even two conversations happening at the same time would cause enough ambient echo that you would need to raise your voice or be a good lip reader to catch what the person standing three feet in front of you was saying.
Initial research on solving the problem was difficult, as sound panels can be VERY expensive, tricky to work with, and sometimes not even safe materials to have around kids. But then we found the Echo Eliminator panel at Acoustical Surfaces, and better yet, a most patient and knowledgeable Ted Weidman, who helped us tackle the problem head on.
The Echo Eliminator panels cost A TENTH of what a leading competitor suggested we use, and they are completely safe (if one fell off the ceiling, it was so light it has “less kinetic energy than a down pillow,” and was made of cotton), and was eco-friendly (made of recycled materials).
Usually these panels are installed by just gluing them to the ceiling. This we decided was not an option for us, as we are renting space, and potentially needing to remove the panels at a later date would render them unusable, and cause some damage to the plaster ceiling. We also decided against hanging the panels on the walls with grommets, as the ceilings were low (8.5′) and we wanted to keep them well out of reach. So we “Davy Crocketted” a solution (with Ted Weidman’s  guidance a big help) by gluing the panels to custom-cut plywood, and then screwing them to the ceiling. Instead of washers, we used recycled lids, painted by the students.
Because installation became very involved, the first night we worked we were only able to install 8 panels (the room needed closer to 100). Regardless, several parents approached us saying that they were ALREADY noticing a big difference!
Four years later, the room is now being used as a classroom before and after lunchtime. This would never have been possible before the panels were installed. The level of improvement is huge. We are now planning on treating the gymnasium with the same product. 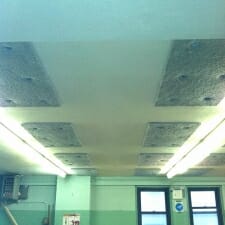 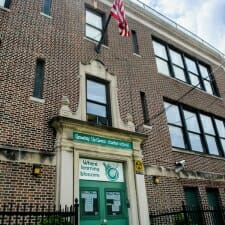