Reverberation – definition, causes, and utilizing it to your advantage

Sound is a funny thing. You could be in a huge amphitheater and hear a speaker 40 yards away from you as clear as day or be in a moderately crowded office and barely be able to hear the person two feet from you.

The reason these things happen revolves around the types of surfaces that sound waves bounce off of in an environment and how long those sound waves take to die out after a sound has been made—the reason, in other words, is reverberation. 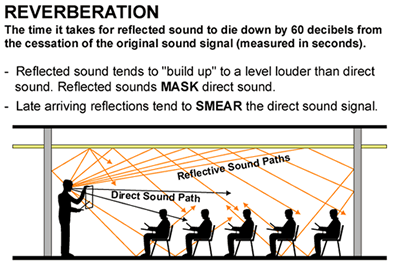 After a sound has been made, the waves from that sound continue to travel. When those sound waves hit and reflect off surfaces like walls, ceilings, floors, furniture, or even other people, that reflection can cause the sound to persist in the space even after the source of the sound has stopped, producing the sonic effect called reverberation.

Reverberation is a common reason it can be difficult to carry on a conversation in a crowded room or why some people don’t sound as clear when you talk to them in a video conference.

Understanding and controlling reverberation can improve the sound quality in your home and professional environments.

Reverberation vs Echo – What’s the difference?

There is a misconception that echo is a reverberation synonym. They are actually two different sonic phenomena. The main similarity between the two is that both reverberation and echo happen after a sound has been made.

We can see the difference when we define reverb and define echo. An echo is a sound wave that has been reflected or otherwise returned with sufficient magnitude and delay to be detectable as a wave distinct from that which was directly transmitted. In layman’s terms, an echo is a reflected sound wave that is audibly distinct from the source sound.

Reverberation, on the other hand, happens when sound persists as a result of repeated reflection or scattering after the sound source has stopped. So while an echo is a distinct sound, reverberated sounds are difficult to hear clearly because the reflections keep repeating.

Basically, echos often sound very clear because the magnitude of the sound and the distance it travels makes it sound distinct.

Reverberation can muddy the sonic waters of your environment because soundwaves reflecting off multiple surfaces pile on top of each other.

What is Reverberation in Simple Words?

Reverberation is the accumulation of soundwaves in a space. Because reverberated sounds stack up, they can make direct communication difficult because there is so much ambient sound and the direct sound can get lost.

When that happens, people tend to speak up to be heard over the din which only causes more reverb, and the cycle continues.

What are the Uses of Reverberation?

That doesn’t mean that all reverberation is bad. When using a microphone, speaking publicly, or performing live, some reverb will help give your sound a richer, warmer feeling. On a recording, simulating reverb using software helps create the sonic illusion that the listener is in an actual space with the musician. Without reverberation, those sounds will seem empty or tinny because they don’t feel as real to us.

In a live setting, too much reverb makes the language hard to understand and too little means the sound from the speaker or performer won’t carry as far. This is why designers of lecture halls, theaters, and concert venues pay particular attention to the reverberative qualities of their venues.

When is the reverb undesirable?

Reverberation becomes undesirable when it is out of control. When sounds from several sources all reverberate in the same space together, speakers must speak at higher volumes to be heard which only contributes to the reverb problem.

Environments that are full of sustained, loud noises can lead to tinnitus or even long-term hearing loss for people that occupy those spaces for too long.

What is reverberation time?

In a room like a normal office where several conversations may be happening at once, a short reverberation time is desirable. Limiting reverb and shortening reverb time is important in video conferencing because a microphone won’t discriminate between the sounds that it picks up.

So you may sound unclear to the people on the other end of your call because your microphone is picking up what you’re saying now and the residual sound waves from what you just said.

How do you calculate reverberation time?

Once you know the reverberation time of space, you can make adjustments to the materials in that space to increase or decrease it.

How to control reverb?

When you are surrounded by hard surfaces and angles, you create an environment that will probably have reverberation issues. Taking steps to control the reverb and echo in your spaces will allow for easier communication because there won’t be so many ambient sound waves bouncing around, masking what you want to hear. With the right acoustical materials, you can achieve the best reverberation time for your space..

Reverberation can make a sound seem warm and welcoming or completely overwhelm the people in a space with an excess of noise.

To make sure you are seeing the benefits of reverberation without the potential drawbacks, talk to an expert today to take the first steps toward a better sonic environment.